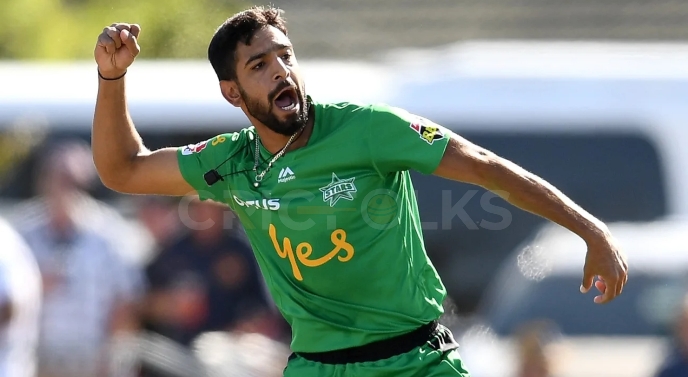 Haris Rauf has been an explosive pacer for Pakistan Cricket but his form suffers since the last few games. Analyzing his last twelve T20 matches, Rauf’s panel includes only a few wickets with a poor economy rate.

As Rauf is a part of Lahore Qalandars’ in the ongoing HBL PSL 6, he featured in the third game of LQ against Multan Sultans but ended up conceding 41 runs in 3.1 overs and remained wicketless.

Have a look at his last fourteen innings: (down to top)

In the Pak vs NZ 2nd T20I at Hamilton, he clinched 39 runs for zero wickets in his four overs.

4 off 44 did not remain an impressive figure for Haris in the T20I against New Zealand. However, he granted two wickets to Pakistan.

Rauf stayed average during Pak Shaheens vs NZ as he once again gave 44 runs in 4 mandate overs to the opponents and picked none.

His stats looked as: 2/36 in 4 overs during Pakistan Shaheen’s tour of New Zealand

Playing BBL vs Wellington Blaze, he succumbed 24 runs off 12 bowls yet no wicket.

Shaheen vs NZ Playing XI: Playing against NZ, Haris Rauf picked 1 wicket and could yield 18 runs – quite impressive than the other twelve.

During the Shaheen vs NZ playing XI, he bowled 2 overs in the final t20I and conceded 27 runs.

Melbourne Stars’ star no more remained a star this BBL. He picked 25 runs for 2 overs and targetted no batsmen.

He conceded 10 runs in an over and picked no wicket

In BBL, playing against Adelaide Strikes, Haris took 33 runs for granted in just 3 overs. He could pick one wicket.
Advertisement

Despite picking 2 wickets, the paceman ended with 44 runs – too mediocre and threatening for the team.

Playing in the T20 series against SA, Haris yielded 26 runs in 2 overs and remained wicketless.

Finally, he clinched what was needed as he picked 3 wickets conceding 38 runs in 4 overs. His three-wicket-haul came after many innings. Notably, these figures are the best of his mentioned twelve. Still, the economy touched 10.00 – not good for a T20 bowler.

Rauf conceded 41 runs with no wicket on delivering 3.2 overs.

PSL or IPL? Reveals Ben Cutting
Sarfaraz and Azam are having a night out in Karachi