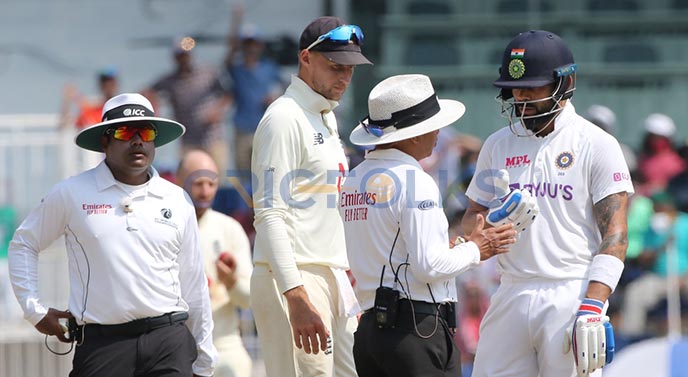 India defeated England by 317 runs in the second Test match after they lost the first Test. Both Test matches were held in MA Chidambaram stadium in Chennai.

All-rounder Ravichandran Ashwin picked up eight wickets as well as a century that helped spun his side to victory. The all-rounder took 5-43 in the first innings and 3-53 in the second innings in his match figures of 8-96. He even scored a century in his side’s second innings where he scored 106 from 148 balls.

Ashwin, along with his fellow spinners Axar Patel and Kuldeep Yadav, took combined 17 wickets across the match, bowling out England for 134 and 164 runs in respective innings.

The second Test in Chennai saw early and rough turns from day one, as it was a piece of evidence when England’s spin all-rounder Moeen Ali sharply bowled Indian captain Virat Kohli for a five-ball duck in the first innings.

There was also an uneven bounce during the innings, which saw a lot of English experts to express their disappointment on the preparation of the pitch for the second match.

The laws of the International Cricket Council (ICC) stated that if a pitch is rated poor, then the home team would lose three points in the ongoing World Test Championship 2019-2021. Furthermore, the rules say that the conditions that make the pitch poor is the excessive assistance to spin bowlers from early on in the Test match. “The pitch offers excessive assistance to spin bowlers, especially early in the match.”

This could be damaging for Virat Kohli and his team India as it can possibly kill their chance of making it to the WTC final.

If they duck this penalty, then India will need to win by margins of either 3-1 or 2-1 to qualify for the final. A loss for India will end their race.

England will need to win by a margin of 3-1. Just like India, a loss for them will end their race to the WTC final.

However, if the result goes 2-2, 1-1, or in England’s favour 2-1, then Australia will sneak through both India and England to qualify for the final and face New Zealand.