Can Rohit Sharma be a better captain than Virat Kohli? 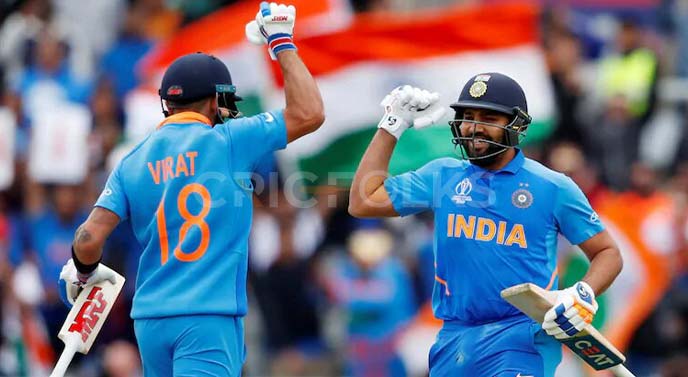 Virat Kohli and Rohit Sharma are two stars of the Indian cricket that have been leading their sides. Since their emerge in 2012, both of them have perform some stellar performances for their side.

Although Virat Kohli announced himself in 2012 with two high class chases against Sri Lanka in the tri-series in Australia and Pakistan in the Asia Cup, Rohit Sharma announced himself in 2013. It was a move made by the then Indian captain and wicket-keeper MS Dhoni, who pushed Rohit Sharma from his regular position at number five to opening position.

Along with new opener in Shikhar Dhawan, Rohit Sharma and Shikhar Dhawan formed themselves as a destructive openers. Especially in One Day Internationals, where the duo have more success.

India’s top order have been dangerous since, with Rohit Sharma and Shikhar Dhawan pairing at the opening slot and Virat Kohli at one down. The trio has been regarded as India’s modern greatest top three batsmen.

Rohit Sharma can take over Virat Kohli as T20I captain

When Virat Kohli took over as India’s all formats captain, Rohit Sharma was announced as his deputy in white ball side. Though in the Indian Premier League (IPL), Rohit Sharma leads his franchise Mumbai Indians (MI) while Virat Kohli leads Royal Challengers Bangalore (RCB).

When it comes to captaincy comparison though, Rohit Sharma surprisingly is preferred over the current Indian skipper. So we will come to ask a question; Is Rohit Sharma a better captain than Virat Kohli? Let’s take a look.

In the famous cricket league, the IPL, Rohit Sharma leads Mumbai Indians while Virat Kohli leads Royal Challengers Bangalore. Both the players are the stars in their respective leagues.

Meanwhile, RCB captain Virat Kohli is yet to win any title in the IPL. In fact, RCB have never won an IPL title in their history. They have been runner-ups three times with Kohli recently leading them in 2016, where they lost the final to Sunrisers Hyderabad by a thrilling eights runs.

Virat Kohli has been leading the Test side since 2014-’15 Australia tour after MS Dhoni announced Test retirement mid-way the series. Then in 2017, MS Dhoni gave his leadership duties to Virat Kohli and from then, Kohli has led India across all formats.

Virat has achieved many series victories, including the famous series win in Australia in 2018, becoming the first Asian captain to win the series. He also led India

He have led India in two ICC world events. In the 2017 Champions Trophy, India came runner-ups under his leadership, loosing the final in a record margin. In the 2019 Cricket World Cup, he led India to semi-finals where they lost to New Zealand.

Perhaps the biggest achievement came in the 2018 Asia Cup, where India clean swept the whole tournament and won their 7th title.

Many may seem to agree with this statement. Rohit Sharma may be able to do better in the shortest format of international cricket. He led his IPL franchise Mumbai Indians to record five titles and led India to good series wins. Personally, he rules T20I cricket too with a record four centuries were scored by him. Two as a captain.

What are your thoughts on it. How should be the captain for India in which formats? Have your say.

Read more: Who will replace Virat Kohli as India’s captain?