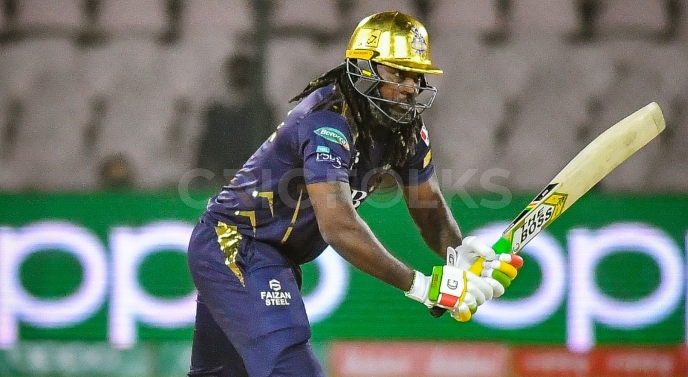 As LQ vs QG continues at the National Stadium, Karachi, Chris Gayle’s maiden fifty has come up. It has taken 11 innings to wait for him to smash a half-ton in PSL

Despite being a smasher of the ball, Gayle never hit a fifty in PSL history. Playing against LQ, he has made his last game memorable smashing 68 off 40 balls.

Notably, he will be flying back to the West Indies for the fulfillment of national duties as the men in the maroon are scheduled to play a series against Sri Lanka.

If possible, he will be looking to return to Pakistan to join Quetta Gladiators commencing the further PSL matches in Lahore’s leg.

Notably, Gayle’s first inning of the PSL 6 did not go much appealing as he was grabbed earlier against Zalmi.

Unfortunately, it’s only going to be two games because I don’t know what will happen after that due to international duty. I have to play a few T20Is for West Indies against Sri Lanka and after that, we will try to work it out to come back in the PSL as well,” said Gayle

With LQ vs QG being played at the moment of writing, everyone anticipated for Hafeez to seize him but the West Indies-based knocker has smashed a 50 and goes with the flow.

Twitter is full of Hafeez vs Gayle T20 stats as everyone portrays Mohammad Hafeez as the toughest bowler he has ever fronted in the limited-over format.

Notably, the fans are creating an issue after Hafeez was removed to bowl against him. They believe surely that he could have removed the Gladiator, hence, it happened.

Gayle can never play Hafeez in T20s, here is why

Gayle can never play Hafeez in T20s, here is why
PSL: Shinwari’s top no-ball moments that changed the whole game