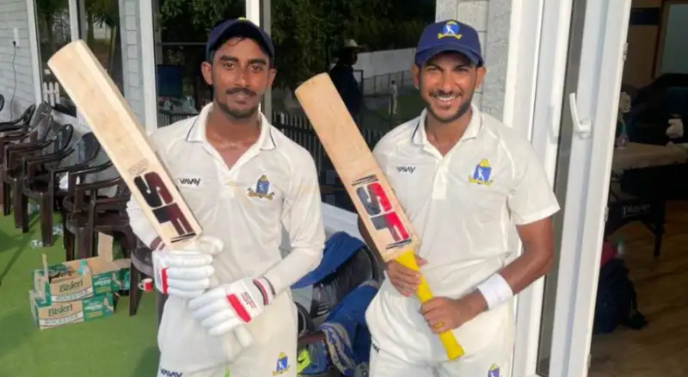 The recent Jharkhand vs Bengal encounter of the Ranji Trophy 2022 has witnessed a thrilling batting show from the Bengal’s line-up. In the first inning of the Quarter Final, the batters portrayed world-class batting creating a unique record as the top nine batters slammed half-centuries to smash Jharkhand’s bowling line-up.

This has happened for the first time in the history of first-class cricket that nine 50+ scores have been registered in a single inning by a team. The openers Abhishek Raman and Abhimanyu Easwaran put a solid start with their scores of 61 and 65 respectively. Supid Kumar played a splendid knock of 186 runs, but unfortunately, handed over his wicket to Rahul Shukla falling short of 14 runs to a double ton.

The middle-order batsmen Anustup Majumdar and Manoj Tiwary contributed with 117 and 73 runs in 4th and 5th positions sequentially whereas, the number 6th and 7th players Abhishek Porel and Shahbaz Ahmed batted for 68 and 78 runs.  Not only the batters and the all-rounders but the bowlers also had their say in putting up 773 on the loss of seven wickets before declaring. Sayan Mondal and Aakash Deep both smashed 53 runs apiece.

With enough runs on the board, Bengal finally declared on 773/7, creating a big tense among Jharkhand’s squad to look it up for. In the second inning of the Quarter Final, the Jharkhand’s batter did not showcase a skilled batting at the top. The opener Kumar Deobart collapsed on 11 runs whereas, Nazim Siddiqui walked back to the pavilion after contributing with 53 runs.

The forthcoming batters Utkasrh Singh and Saurabh Tiwary could not last for more than 5 and 33 runs. Whereas, the 6th positioned Kumar Kushagra had no say than 2 runs. The 5th and the 7th positioned batters Virat Singh and Anukul Roy are currently not out on the scores of 17 and 1.

Will there be two IPLs per year now?

Will there be two IPLs per year now?
India’s Mithali Raj retires from international cricket